Book review: Brian and Peter: A Right Pair: 21 Years with Clough and Taylor 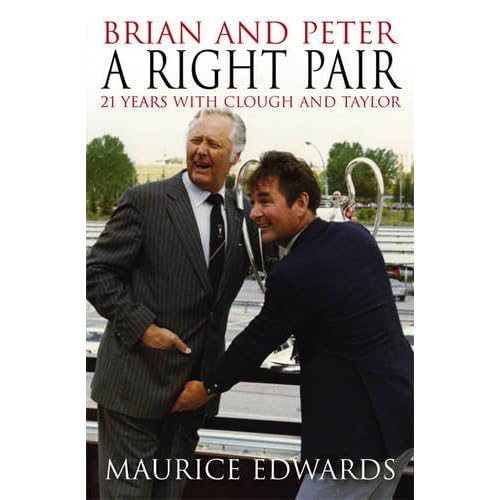 Oh great – the cynic might think – another book cashing in on the vogue of Clough and Taylor.  I must admit to being a little bit apprehensive. The author – Maurice Edwards – was quick in the prose to place Peter before Brian – but doesn’t in the title. Brian and Peter: A Right Pair.  So it was with a degree of scepticism and suspicion that I tackled the tome.

Edwards is the only person to have worked with Clough and Taylor at all their clubs – first meeting Taylor at Burton, and through him Clough.  Reservations were quickly assuaged with what is an fairly linear account effectively of his career as a player, referee and finally scout (whilst running a Post Office business) working closely with Taylor and Clough.

Certainly the contents here outweigh the writing. As promised there are a few revelations in here I certainly hadn’t heard before – and I think I’ve hoovered the majority of writings about the pair over the years.  Maurice Edwards too, it turns out, is a bit of an unsung hero in terms of some high profile signings (of course, he worked very secretively with his gaffers – both of whom are no longer with us, so we can’t verify it).

Garry Birtles is one he takes credit for – having seem him lead the line for a side that lost 5-0!  Birtles himself apparently was unaware of Edwards’ involvement.  Shilton too, and you don’t get too many higher profile signings than that in Forest’s history.  But obviously the story wasn’t just about Forest, and there’s a few interesting revelations around every turn in Clough and Taylor’s career.

Peter Taylor seriously considered leaving Brian Clough at Derby to take up the post of Assistant Manager at Manchester United.  As far as I know, that’s not been written before; the author suggests Clough himself never knew.  He alleges that Don Revie was actively sabotaging Clough’s short tenure at Leeds, backed up by Revie previously attempting to tap up Edwards whilst Clough and Taylor were still at Derby – trying to upset the apple cart.  The author stayed loyal to Clough and Taylor.

He reveals that Roy Keane was apparently turned down by Tottenham before Forest picked him up for £16k, he amusingly recommended a certain Robbie Savage to Derby back in 1993 when he was still at Crewe – and more recently still pointed out a certain Kris Commons to Forest whilst working under Ian Storey-Moore as a scout for us.  An influential man behind the scenes over the years, for sure.

A quick and interesting read, A Right Pair took me a couple of days to get through.  There’s a few amusing typos too, with Einar Aas unfortunately being referred to as ‘Ass’ throughout!  All in all, there’s some revelations in there which – whilst not scandalous – are certainly interesting for Forest, Derby and Burton afficionados.  The book also offers a great insight into the way football business was done back in the days before footballers all had agents.

Maurice Edwards played a shadowy role, clandestine meetings in carparks, surreptitiously paying players who were stalling on contracts in order to sign for Clough and Taylor, spotting talent from the stands masquerading as a paying punter and remaining a loyal and constant companion to two such familiar characters in football history. From these accounts he’s a chap who deserves more recognition, and people should take the time out to read his story.

by Gary Roe,
I have just sat through the movie based on The Damned Utd by David Peace and I can honestly say the film made Brian look a wimp. Almost like a Yorkshireman I waited until someone lent me a copy before witnessing a deception of the scale of fairies, [...]